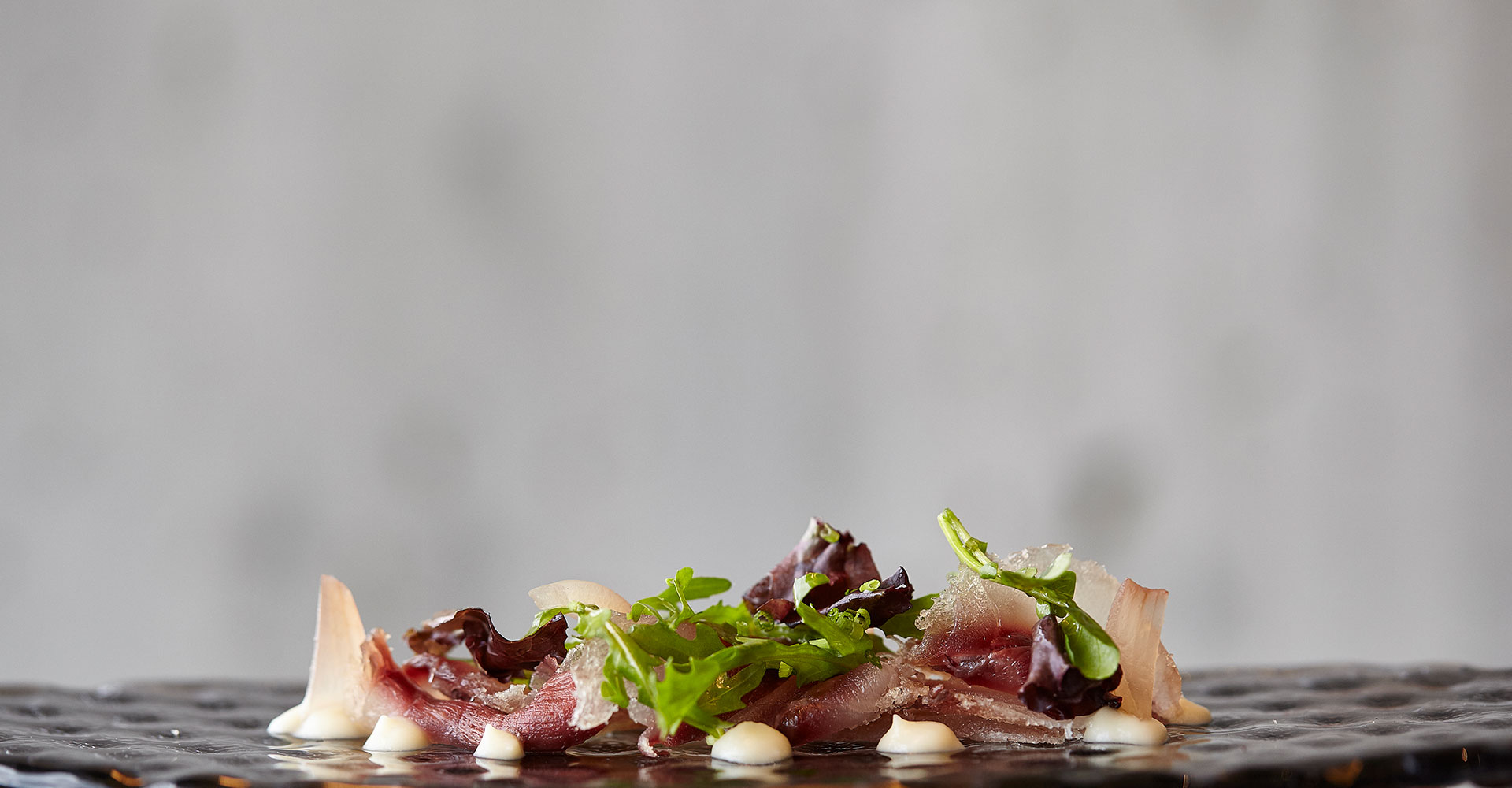 It was from the dream of a man, Celso de Lemos, that Quinta de Lemos was born in the late 90s. The desire to offer Viseu, his birthplace, a legacy to the future, gave rise to a vineyard, a winery, and the Mesa de Lemos restaurant.

At the helm of this restaurant of excellence, focused on associating the best regional and national products with the techniques of modern cuisine, is chef Diogo Rocha, a native of the region.

This unique project is based on sustainable gastronomy, serving seasonal flavors and national dishes, in which the main concern is the ingredients, many of them from Quinta de Lemos itself. The philosophy practiced here is maintaining the ingredients in their pure and natural state. Allowing to express the most genuine flavors. 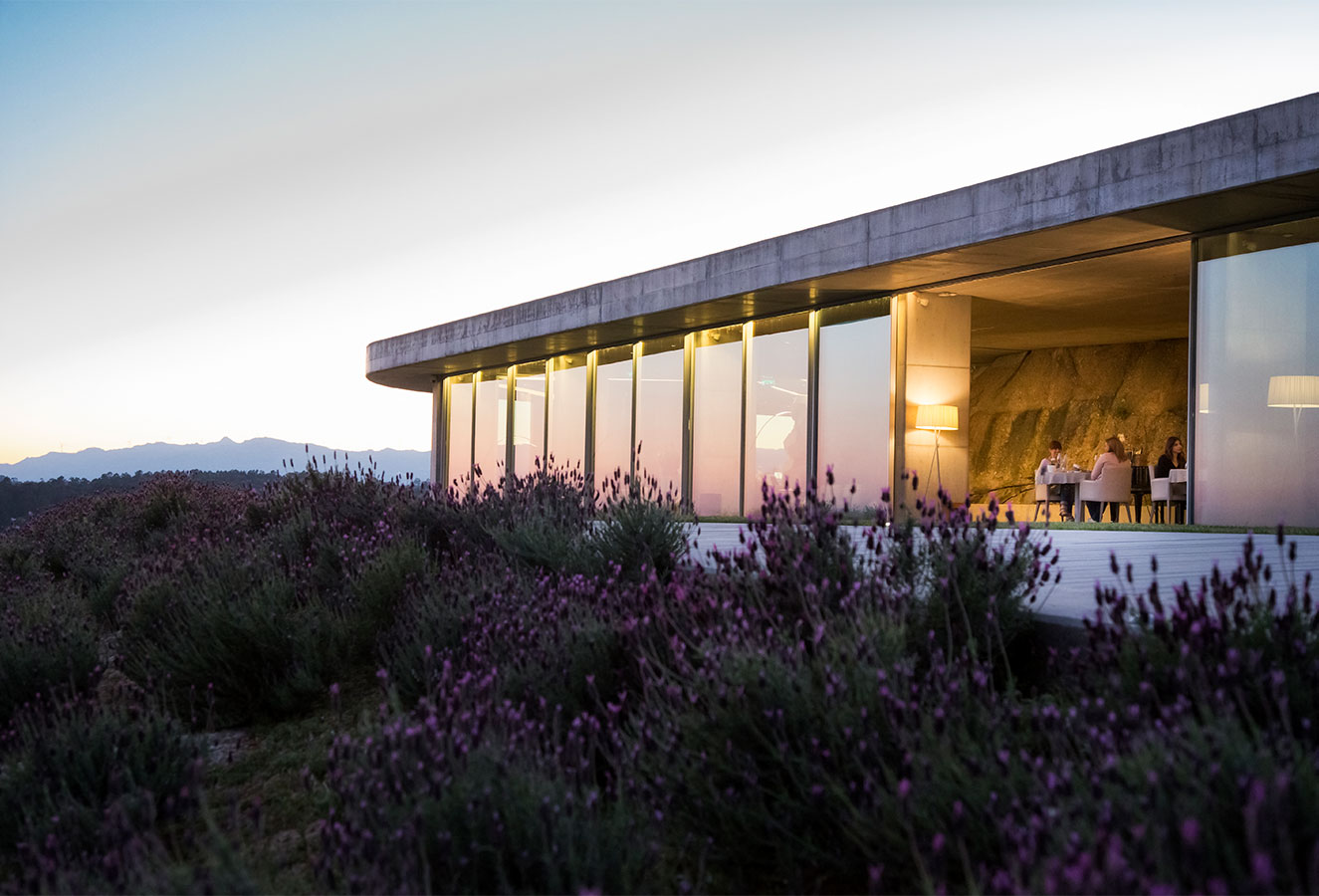 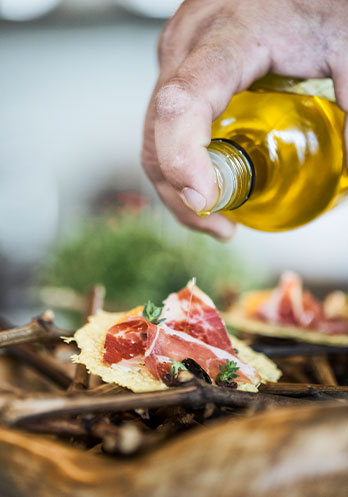 Join us at our table: table is the exact translation of the Portuguese word ‘Mesa’.

In perfect harmony with the surrounding nature, the mountains, the vineyards of Quinta de Lemos and the tranquility of the sloping landscape, Mesa de Lemos offers its guests a gastronomic voyage. Captivating the essence of Portuguese ingredients in pure, simple and delicious dishes.

Besides a lot of creativity, quality and a lot of respect for the products, there are some constant elements at Mesa de Lemos: Quinta de Lemos’ wines, with the signature of Hugo Chaves- our winemaker, olive oil and vegetables grown at the estate. Finally, also the finest linens by Abyss & Habidecor and Celso de Lemos, the luxury textile brands that made the existence of this project possible. 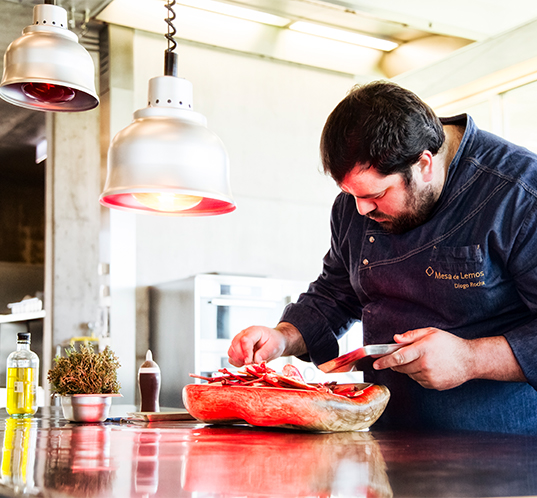 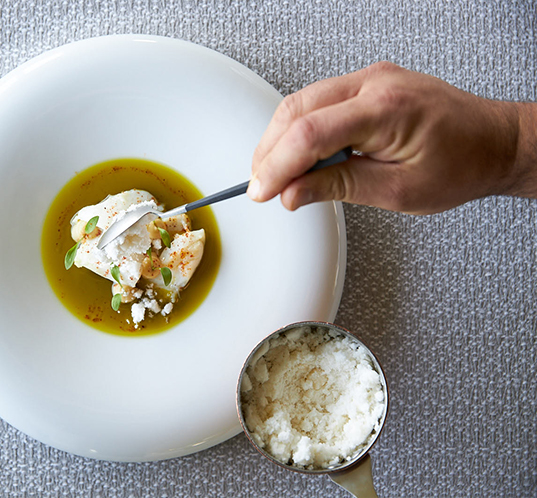 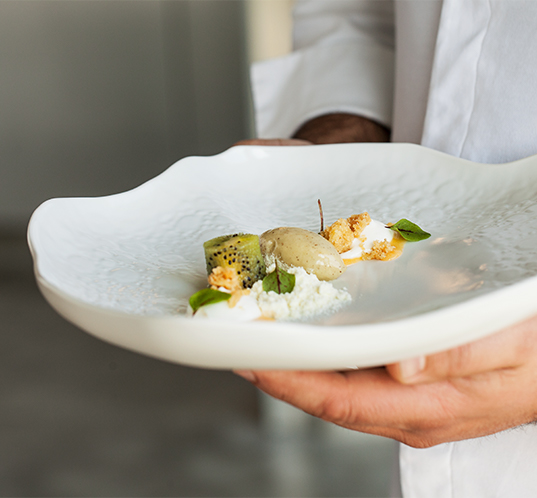 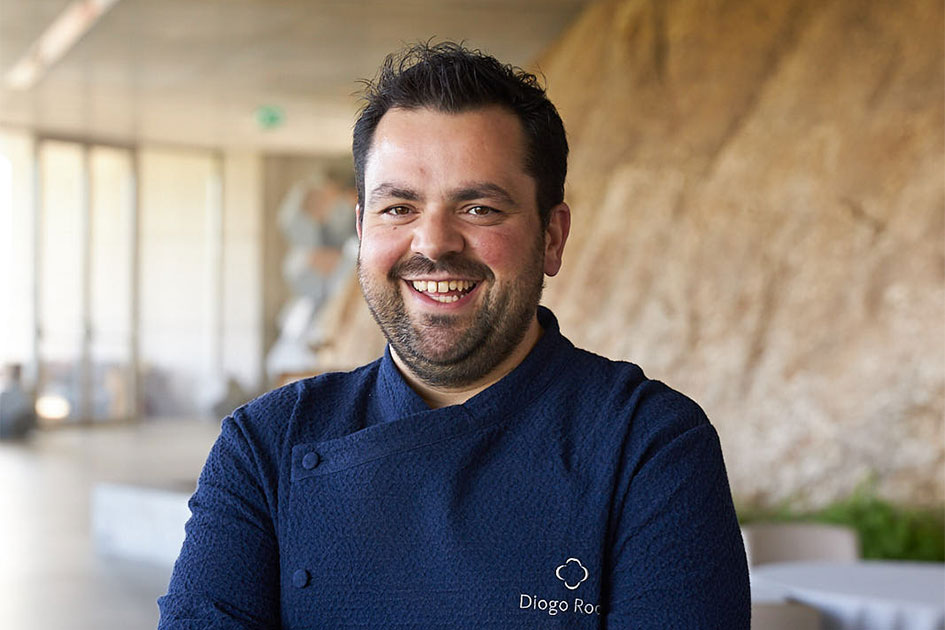 In 2008, he joined the association of ‘Dão Sul’, where he assumed the executive leadership of the entire group with three catering spaces: Quinta de Cabriz, Quinta do Encontro and Paço dos Cunhas de Santar. They were awarded that same year with the title of ‘Wine-tourism of the year by the magazine ‘Revista de Vinhos’.

Since 2009, he is part of the faculty of the ‘Seia Higher School of Tourism’, where he teaches Gastronomy subjects.

In July 2013, he joined the group of Celso de Lemos, opening the restaurant- Mesa de Lemos: he became the Executive Chef in April of the following year. The nature and preservation of the purest state of the ingredients are the premises that guarantee the high quality of products, in line with what the Chef believes. Many of the ingredients used in the Mesa de Lemos restaurant are produced on the property and the whole concept calls for the selection of high-quality endogenous products.

Since 2015, Diogo Rocha assumed the role of ambassador of the Lugrade codfish brand. Codfish is a superior national product and our Chef has a selection of premium codfish from Iceland, nominated as ‘the selection of Diogo Rocha’.

In December 2016, he published the first book, “Today Diogo Rocha”, which shows the affection for his region and the love he has for Portuguese products. This was awarded the “1st Photography Prize” for books on gastronomy in the contest, organized by the ‘Portugal Cookbook Fair’. The photographs of this and the following book are made by Mario Ambrózio.

From 2017, Diogo Rocha is appointed official ambassador of Viseu: promoting and supporting the gastronomy of the city and region with his presence at FITUR, BTL and other events, such as the “Viseu Estrela à Mesa”, where he assumes the curator role.

In November 2019, he publishes his second book “the Chef's Cheese” which, in addition to the characteristics, production method, snack suggestions, and wine pairing, has over 50 recipes on how to use the best Portuguese cheeses. A guide to discover the secrets of the best cheeses from Portugal. The book was awarded and recited on excellency reading-lists.

His third book hits newsstands in June 2021, “Mãe, Hoje é Bacalhau à Chef Diogo Rocha”, with photographer Mário Ambrózio, Lugrade and Casa das Letras. This children’s book is dedicated to Maria de Lurdes Modesto, whom he considers to be more than deserved, for all that she has given to portuguese cuisine and names her as “…the best Mother that our gastronomy could have had”.

In March 2022, Chef Diogo Rocha receives the prestigious “David Lopes Ramos” Gastronomy Award in the annual awards edition of Grandes Escolhas magazine, which every year elects the best persons in the area of wines and gastronomy.

Born in 1983 in Urgeiriça-Canas de Senhorim, Diogo Rocha started working in the area of the professional kitchen quite early. He studied the ‘Cooking and Pastry Course’ in Coimbra, graduated in’ Food Production and Catering’ and became a ‘Master in Tourism Sustainability’ at the Escola Superior de Turismo e Hoteleria in Estoril, where he specialized in products of the Serra da Estrela, the mountains closely to Viseu. He participated professionally in different projects; from catering (Encontrus) and hotels (Hotel Urgeiriça) to the restaurants of Terreiro do Paço, Villa Joya and Valle Flor.

‘Mesa de Lemos’ has won several awards since it opened.
It was the Revelation of the Year in the 2015 edition of the Boa Cama Boa Mesa (Expresso) Awards in the category of ‘Boa Mesa'.
From 2016 to 2022 it has been awarded with the "Gold Fork" award by the same guide.”
In February 2017, Mesa de Lemos was also considered as Restaurant of the Year by Revista de Vinhos.
In November 2019, the restaurant was awarded a Michelin star, repeating the distinction in December 2020 and 2021.
A wonderful reward for this project in the heart of the Dão region. 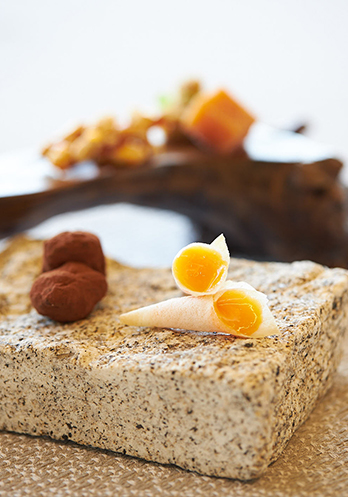 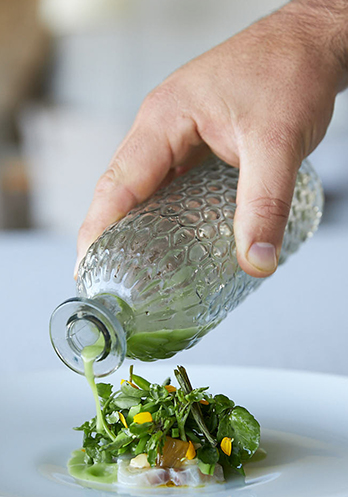 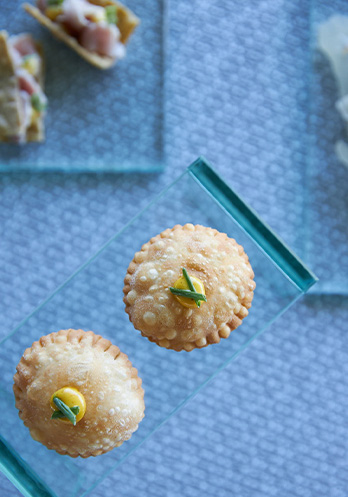 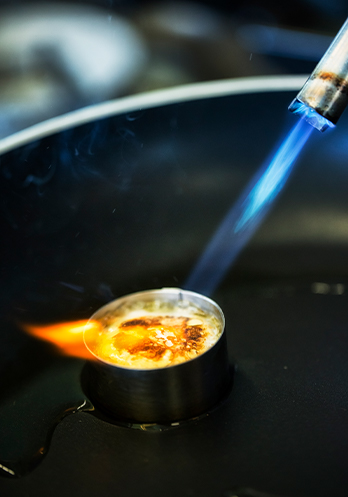 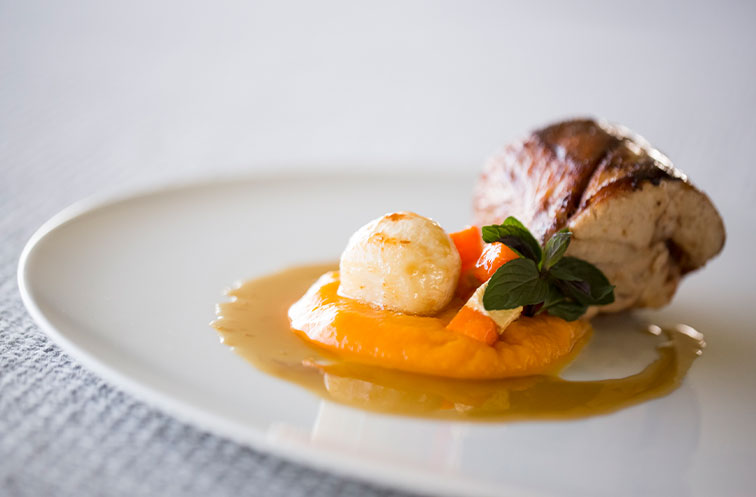 The restaurant Mesa de Lemos is integrated into a beautiful guesthouse, that reached in 2014 the short-list of international awards for ArchDaily, one of the most prestigious architectural organizations in the world. The building, designed by the architect Carvalho Araújo, fits perfectly into the granite landscape, with large windows accompanying the restaurant's straight lines and flooding the space with light.
The interior is a project of great sophistication and comfort designed by Nini Andrade Silva, where we feel immersed in the landscape, among the vineyards of Quinta de Lemos. Beautiful ceramics from Geraldine Esteves enlighten the space. 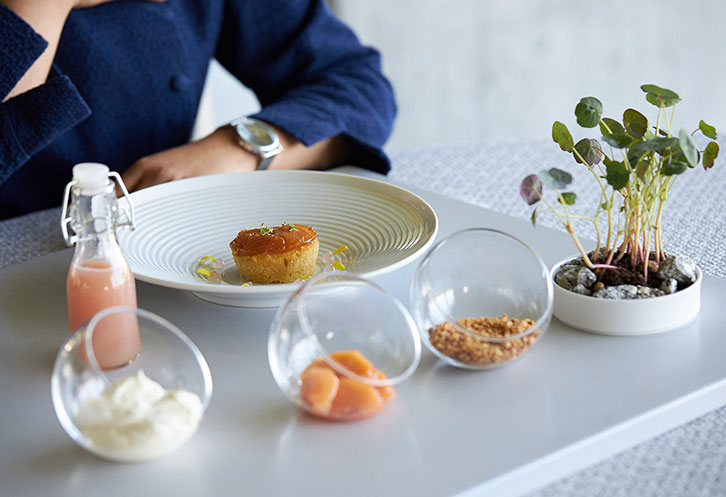 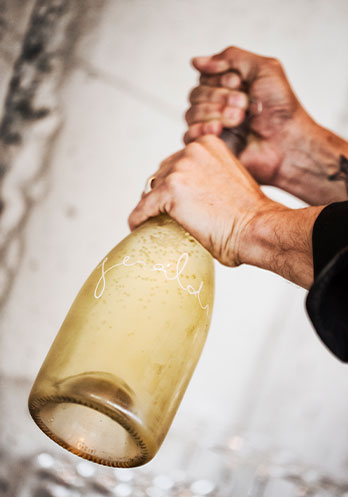 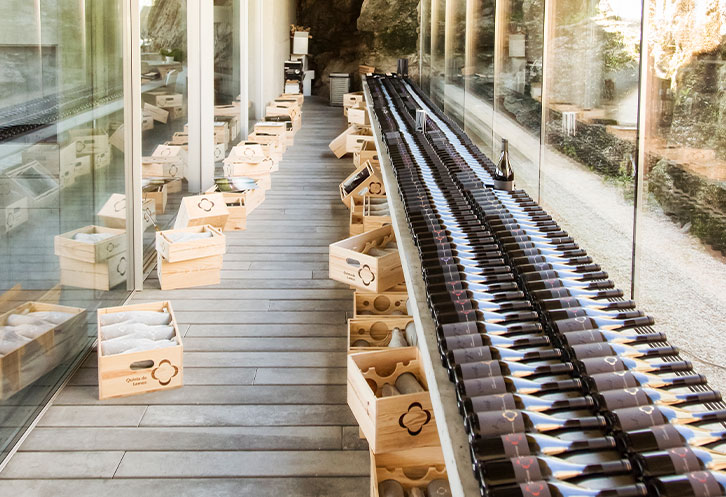 OPEN ON
Wednesday and Thursday
from 20-24h 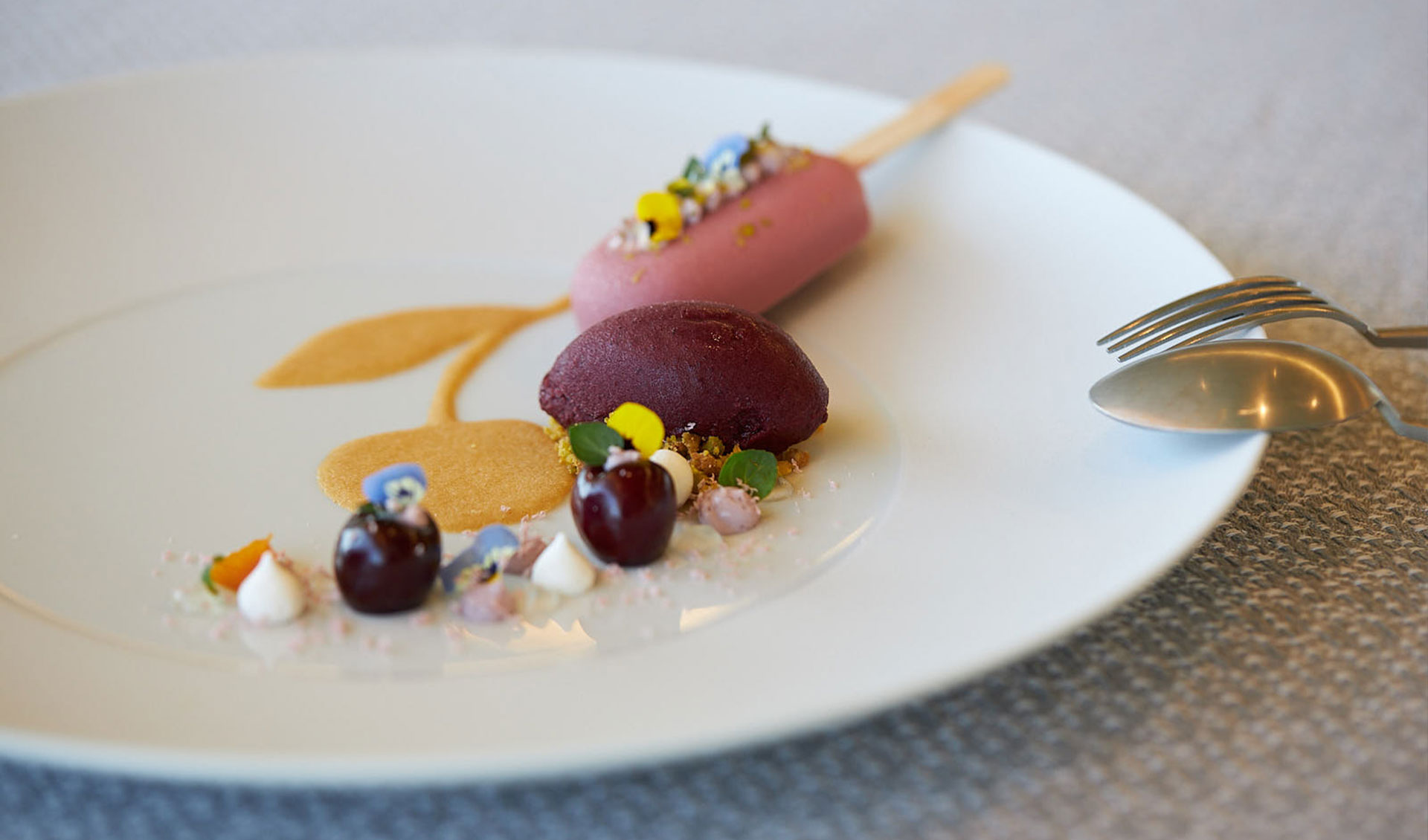 It is a pleasure to welcome you into the world of our family. We value your opinion. Don’t hesitate to give us feedback on our products and/or services.

Highly appreciated. We are pleased to help you with any inquiries that you might have.

The personal data provided is intended for use by Mesa de Lemos and is only intended to respond to your contact request and for future business contacts with Mesa de Lemos. Mesa de Lemos assumes that the data provided has been entered by the respective holder or that their collection has been authorized by them. The data provided are subject to confidentiality, and the holder is guaranteed the right of access, rectification, deletion, or opposition thereof under the law, upon request to e-mail geral@celsodelemos.com

A ESTRELA DO DÃO